skip to main | skip to sidebar

Synthesis: Why the Drug Industry Tries to Improve the Public's Health--and Ends Up Doing the Opposite

A while back--March 16, to be precise--I promised a post that would pull together a number of previous commentaries and show how they were presenting us with a unified account of what's going wrong with today's efforts at "better living through pharmaceuticals." Sorry about that ol' day job, but I am finally back and will attempt to deliver on my promise.

I offered some graphic representations of the basic concept in the post on the Inverse Benefit Law. In what follows I will offer a slightly different way of trying to show what we're talking about in visual form.

We begin with an unholy alliance between two important forces. Physicians and patients have both been thoroughly indoctrinated, over the past several decades, to the mantra of prevention via early diagnosis. We devoutly believe that if we detect a health problem late, then it's really hard to do anything useful for the patient, whereas if we catch it early, we can easily reverse the bad effects and assure the patient a long and healthy life. To that mantra we have added a further devout belief in risk factors. If we catch the factors that put you at risk for later getting the disease, then things are even better than when we catch the disease early. We can set about reducing or reversing those risk factors, assuring even better health and longevity. This devout set of beliefs in prevention and screening for early disease and risk factors is now added to the other major force--the drug industry's desire to sell its wares and make a profit. A drug that you take for a couple of weeks to treat an acute condition offers a certain amount of profit. A drug that you have to take for the rest of your life, to keep a supposed risk factor under control, yields a much greater profit.

This conjunction of forces leads to the illustration below, of what ideally ought to happen as a result of earlier and earlier diagnosis and risk factor identification--that is, lowering the threshold for saying that a person needs some sort of treatment: 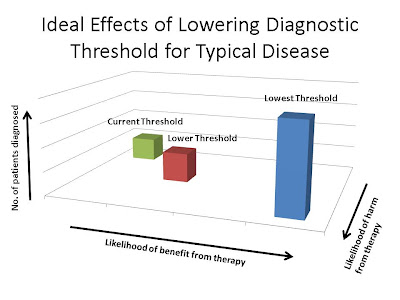 Lowering the threshold for diagnostic labelling does exactly what the drug marketers want--vastly increase the number of people who are labeled as needing treatment. (For the details on how this happens, see the post on the Inverse Benefit Law.) Because so many more people are candidates for the drug, then that many more people are at risk for adverse reactions from the drug--so the bad news is that in public health terms, the harm burden of the treatment for this disease increases. The fond hope, that makes this the ideal desired state, is that the increased chance of harm is more than offset by the probability of benefit. The newly diagnosed/labeled patients are all located at the high-benefit end of the field. The idea is that through early identification and intervention, we are doing them a great service by offering treatment to reduce their risks of later disease. We are getting them in precisely the most treatable situation, so our chance for helping them is greatest. Or so says the comforting mantra.

However, is this idealized state of affairs what actually happens in the real world? That's where the insights of Welch et al. and Mold et al. come in. Mold and company address the specific situation where there are multiple preventive interventions all recommended for a given chronic disease, according to the expert guidelines. First, it is hardly ever the case that all are of equal value--though the guidelines hardly ever admit that. Some will have a huge bang for the buck and some very little. But even if they were of equal value, Mold adds, they are not additive. Do preventive intervention #1, and you've reduced the risk of having the bad outcomes from the disease by a certain percentage. Do intervention #2, and you are mathematically certain to reduce the remaining risk by a much lesser percentage. Add #3 and you get even less for your investment of money and risk of adverse reactions. And so on, for a law of diminishing returns.

Welch's group makes this point more general, so that it applies even to single interventions (such as statins for lowering cholesterol, drugs for diabetes, or just about anything similar). For almost all such drugs, the greatest likelihood of benefit (which as we explain under the Inverse Benefit Law, corresponds to the lowest number needed to treat or NNT) resides at one end of the horizontal field depicted in the figures. The people with the highest risk of heart disease, or the highest cholesterol, or the highest glycohemoglobin in diabetes, or the highest blood pressure, or you name it, benefit hugely from a treatment to lower that risk variable. The lower any of those measures go, the less the likelihood that treatment will prevent a bad outcome (higher NNT). So the lower you drop the threshold for diagnosing the disease or risk factor (deciding, for example, that instead of diagnosing diabetes when blood glucose reaches 140, we'll make the diagnosis at 126), the lower the likelihood of benefit for any given patient. This means that the real, as opposed to the ideal, state of affairs is shown in the following diagram: 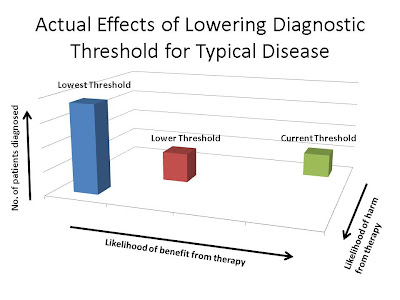 In short, the drug marketers are still in heaven, because you have labeled more and more people as needing what they sell (assuming that you can convince docs and regular folks that taking a pill is the answer--as they've so far done a brilliant job of). But in the process, you've shoved the whole mess of them into the lowest-benefit portion of the field of operations. The increased public-health load of adverse reactions (or excess costs for that matter) is now uncompensated by the hoped-for benefits. You've exposed tons of folks to the harms and costs while assuring that only a small fraction of them would receive any real benefit. If those people could be fully informed of the tradeoff you've just negotiated, many would refuse to take the drug. (Nowadays of course they go like sheep to the slaughter, both because we don't inform them adequately, and also because we all believe the prevention-screening-early identification mantra.)

As a minor point, the "Actual" figure is pretty much exactly what we depicted in our bell-shaped curve in the Inverse Benefit Law, but displayed in a different manner.

So now we turn to Ioaniddis. His insight helps to show that when the marketers work to make sure that we never realize the "Actual" state of affairs and continue to assume that the "Ideal" holds true, they are aided greatly by certain features of the research process. Even when a new drug actually is no better than alternative drugs, or placebo, it's likely to look better early on in the research cycle. That's true even when the marketers don't put their thumb on the research scale. As we've seen over and over in this blog, they can seldom avoid the temptation to add the thumb, exaggerating the benefits of the drug or minimizing the adverse effects by selective reporting of the data or some other form of spin. When both docs and patients are misinformed about the benefits and harms, and the mantra of prevention continues to seduce us, then no one is likely to realize that the actual world is not the ideal world. And that's just what the marketing people want.

A minor footnote. One of the take-home lessons of this sermon is that for all of its heft, and for all the heavy financing muscle behind it, drug marketing can hardly ever convince is that up is down or black is white. Most people, for instance, think that having to take a bunch of pills every day is a real drag. So we therefore never see consumer ads on TV telling us, "Guess what, folks! Taking a dozen or more pills every day is FUN!!!!" These marketing geniuses are way too smart for that. What they're super-good at is taking something we already believe, or want to believe, and tweaking it or amplifying it or running with it, to get us to use that as just one more reason why we really, really need to swallow their new, expensive pill. So when they come across something like the prevention-screening-early detection mantra, they're golden. All they have to do is convince us to keep on believing what we already believe, and we're eating out of their hands. Which is why getting the Mold or the Welch message out there to the public--without which, no patient is truly able to make an informed choice about taking a pharmaceutical--is going to be such a daunting task.